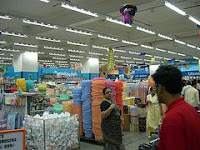 The Pioneer of Indian Retail – Mr. Kishore Biyani is more realistic than other CEOs of Retail operations in India. Dating back to the hey days of Jan-08, KB decided to write to his employees that they are heading into tougher times and not the days of economic boom. In his Monday morning e-mail he said – Garv Se Kaho Hum Kanjoos Hain [Say proudly that we are stingy] Mr. Biyani took an oath with the employees of Big Bazaar that they will cut costs wherever necessary. Their margins have been affected over the next few quarters, but the company has survived and will sail the slowdown.

Thank God for what we call Kishore Biyani’s sixth sense. Early on, he had an inkling of things to come and we kicked in the restructuring and reorganisational process quickly. We have revised production norms and are redeploying existing people in new stores.

It is not his sixth sense but his experience and vision to forsee things that madeh im send the email and take the pledge.

Mr. KB is taking cues from Telecom czar Mr. Sunil Mittal. KB outsourced IT and other related functions to optimize cost and focus on pure Retail play. This is one of the greatest management lessons for professionals stepping out of biz schools but have no idea on such business models 🙂

The organisation has been designed in a manner to adapt to changes faster. So, a Pantaloon customer moved to Big Bazaar, or an EZone customer buying Samsung could now buy Koryo at Electronics Bazaar. By being present across the consumption basket – fashion, food, electronics, mobiles, furniture, and home products, Pantaloon kept overall sales growth far more stable. Even if customer decided to spend less on furniture or mobiles, spends on apparel or food continued to grow.

KB is now negotiating deals with Mall Developers and we believe that he has closed deals in atleast 4 malls at rentals of 20-30% discount.

Mr. Ambani of Reliance had tried to talk to Mr. Biyani in 2006. However, those talks broke down abruptly and since then, Biyani has emerged stronger than ever and climbing higherto clinch the title of Retail King of India- atleast in Retail 1.0 War.