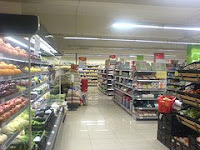 After merging group company Reliance Petroleum with flagship Reliance Industries, Chairman Mukesh Ambani has now set his eyes on making it big in the Retail. Over the past 28 months, after opening the first Reliance Retail Store – Reliance Fresh, the company has done in-depth market research and tested waters on how to proceed to make it a Multi-Billion Dollar business.

It is learnt that, Reliance is set to expand its Reliance Frehs Stores fro mthe current 645 to 1,000 by March 2010. The management’s focus is clearly on value retailing the vertical which Future Group focused from the beginning. Reliance will also add more Supermarts and Hypermarts in the next 12 months.

Status of Reliance Retail Stores as on Feb-2009:
Reliance Retail has 920 stores across 20 formats covering a retail space of 4.5 mn sft reaching 80 Indian cities. Herei the individual breakup of Stores

Until now, the show clearly belonged to Mr. Kishore Byani, the Pioneer of Indian Retail. Going forward we can expect good competition from Reliance, Aditya Birla’s More and other retailers.