The over hyped Reliance Retail venture is yet to take-off. The company lost Rs 260 cr in FY 2010. Though Reliance operates ~1,000 retail stores in 14 states (85 cities) there is not a single commendable venture and the company is still battling for a strong foothold.

Reliance Fresh has highest share it sales as well as losses. Reliance has invested Rs52bn of equity in its retail ventures a fifth of the Rs 250bn that was quoted to the media during initial launch. Investments in retail had slowed down substantially in FY10.

The following chart shows various Reliance Retail Ventures and the Loss each one of them are making. 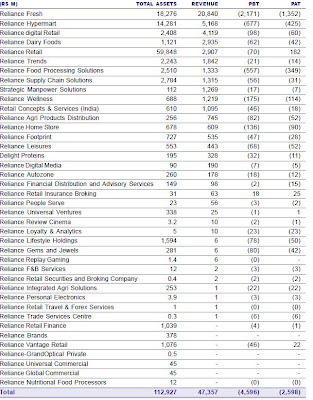 The Ambani Group’s performance is miserable when it comes to dealing with consumers as they lack the professional touch so essential for today’s urban consumer.