The Indian retail industry (estimated size of INR1.2tn and US$24bn) has witnessed a robust growth of 12% over the past five years as rising income levels, favourable demographics and urbanisation trends have helped drive consumption boom.

Organized retail has seen an even sharper increase of 43% over the same period helped by a combination of factors including low penetration levels, rising awareness and aspirations and increasing consumerism. Private final consumption expenditure has been the key driver of economic growth over the last few years. To put this in perspective, in FY08, PFCE was c. US$650bn or c. 62% of the GDP of the country. Out of this, retail contributed c. US$ 410bn or 63% of the PFCE. 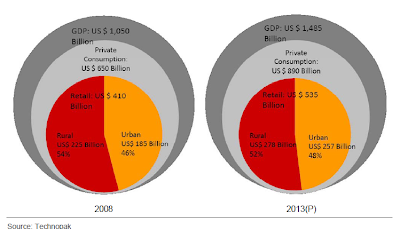 However, even after taking the growth over the last few years into consideration, organized retail penetration continues to be amongst the lowest in the world at an estimated c.7%. We expect the organised retail industry register a steady growth of c.15% over the medium term thus implying a penetration level of c. 12% in 2012 rising to c. 20% by 2020.