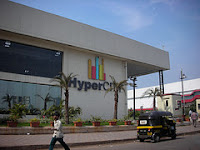 Be it the Reliance Power IPO or Retail business, the Indian newspaper and TV which ethical journalism and is known to create a lot of Hype chasing very few stories. Mr. Andrew Levermore, CEO of Hypercity Argos Retail said,

Carried away by the hype created by media and retail players through announcements of huge investments, the sector is inviting many players with lot of money but hardly any expertise.

When such a thing happens, the industry consolidates as weaker souls sell out. Hypercity which pioneered the concept of catalog retailing in Mumbai and accepted by many Mumbaikars is now planning to expand to other cities. The company plans to roll out 60 such Hypercity stores across India involving an investment of $ 3 billion. Apart from Hypercity, the group wants to introduce Express City, smaller format stores. The first Express City is operational in the Pink city of Jaipur.

We are at a unique position in the market, as our target customer is the upper middle class. It does not cost anything to a retailer to keep a store clean. It’s a myth that consumers think a store offers better prices if it is dirty or unkempt.

I guess Mr. Levermore was indirectly referring to Subhiksha 🙂