Indian Coffee Chains is the second Article of our focused coverage about Retail Chains in India. Indian Apparel Chains was the first article in the series.

Organized coffee shops in India is a big business which is growing at the rate of 35%. It is likely to reach $200 mn by the end of 2010. Seeing this potential, International chains like UK based Coffee Republic, Italian Coffee major Caffe’ Nero and Germany’s Cup n Cino are looking for retail partners in India to make their foray into the market. The number of branded coffee outlets in India is expected to increase to 2,600 stores in the next two years from present 1,250 outlets.

Coffee sold through branded outlets is worth Rs 600-700 crore a year at present and that market is expected to business of over Rs 10,000 crore in the next five years. Chains such as Costa Coffee, Gloria Jeans and Coffee Bean & Tea Leaf are among the foreign brands that have opened stores in India. 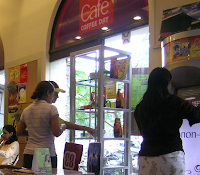 Global players are foraying into India growing beverage market. They are tying up with India partners. US based leading coffee chain, Starbucks, has entered into a distribution tie-up
with India’s leading multiplex operator, PVR Limited for its selected products. PVR has started retailing Starbucks products at its three multiplexes in Mumbai and Delhi and plans to extend the arrangement across major metros in the future.

Cafe Coffee Day: Amalgamated Bean Coffee Trading Company Ltd. (ABCTCL), owns and operates India’s largest coffee chain – Cafe Coffee Day popularly known by an abbreviation amongst the Indian youth as CCD . It is a ISO 9002 certified company. Cafe format of CCD include Music Cafes, Sports Cafe and Book Cafes. First cafe of CCD opened at Brigade Road in Bangalore in 1996, which was also an Internet browsing cafe then. Currently, there are more than 620 cafes in 102 cities across India and the World.

Barista Coffee Company: Barista has 130 outlets in three countries namely India, Dubai and Sri Lanka. Barista has plant to increase the total number of outlets to 300 and is focusing on different business models for expansion – corporate ones [Store outlets on-campus], high street area of high footfalls such as malls and company owned exclusive stores. Barista has seen series of management changes. Turner Morrison sold to Tata Coffee which in-turn offloaded to Opportunist businessman Sivasankaran who finally sold it at a hefty premium to Italy’s Lavazza.

Mocha: Mocha was opened in Mumbai in December 2001. Mocha Coffees & Conversations has 20 units out of which 12 are franchised. The largest Mocha in India with 10,000 sq. feet.

Costa Coffee: UK based cafe chain Costa Coffee entered in India in 2005 through master franchisee tie-up with Ravi Jaipuria owned Devyani International Limited (DIL), the company that owns the franchisee for Pizza Hut and KFC in India. It has around 36 stores in India and more than 850 stores worldwide.

Barnie’s: US based coffee chain Barnies Coffee and Tea Company started its operation in India in August 2005. Barnie’s opened its first store in Noida. Victoria Impex Pvt. Ltd. is the master franchisee of Barnie’s Coffee. Barnies Coffee & Tea Company Inc was found in 1980 in the US.