According to Jones Lang LaSalle, the northern regions of India rate high on propensity to consume followed by the western, eastern and southern regions. Cities in Punjab and Rajasthan have higher rents in prime retail areas compared to Gujarat and Madhya Pradesh.

The following Chart Shows the Economic Strata of Top 20 Cities in India along with Per capita Income of Sec A of the population, Market Maturity Index and Market Potential Index. HIG is taken as all households with annual income of INR 5 lakh. 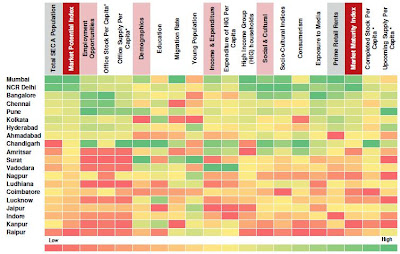 Industrial towns are similar to each other in consumer preferences and socio-economic & demographic profiles. Most of them remain equally under-served despite recent mall developments in the last couple of years.

The following chart shows how naive the Retail Market in India is for Hypermarkets with extremely low Broadband Internet penetration which suggests that their is no immediate threat of e-commerce as in Developed Markets. 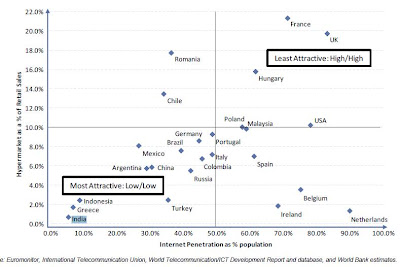