To unlock shareholder value in non-retail businesses and consolidate Pantaloon Retail as a pure retail play to grow faster as the economy rebounds, Pantaloon Retail / Future Group has undertaken a massive restructuring exercise. It is dividing its businesses into three parts, namely, retail, financial services and other support businesses Here is the present structure of the Group [Pre-Restructuring] 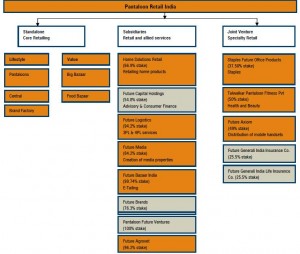 The restructuring process is progressing in full swing and, as a result, there is little clarity on the movement of various subsidiaries within the group. It will hive-off its value retail business, which includes Big Bazaar, Food Bazaar and other related formats, into a whollyowned subsidiary. The Group’s format Pot-Restructuring is as follows. 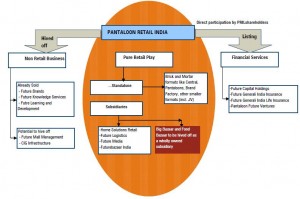