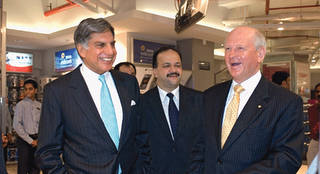 Just last week, Tata’s unveiled their Croma chain of consumer electronics opening their 25,000sft Juhu store. In the picture to your left, you can see Tata Group Chairman, Ratan Tata with Ajit Joshi CEO of Infiniti Retail the holding company of Croma at Juhu store.

We all know that Foreign Direct Investment in India in the retail sector is banned by the government of India. So what Woolworth has done is, they have put Tata’s as the front-end to deal with Indian consumer and they play the cards at backend. Tata sons have agreed to infuse Rs400 crores as equity in Infiniti Retail and another Rs400 crores as working capital with a promise to nourish more if needed.

Infiniti-retail and WoolWorth India Deal:
Woolworth will get all the required products and supply to Infiniti Retail which will then sell through Croma chain of stores. Infiniti is prohibited to sell to any other retailer and has to source all its goods from Woolworth only. While Woolworth will supply exclusively for Infiniti only. A win-win for both if the price and quality of the products sold appeal the Indian consumer.