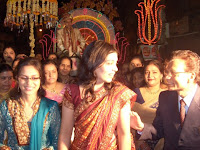 Titan Industries has reinvented itself as a sought after Brand for consumers in India. We will have a look at the current state of the 3 Large Segments of its business – Watches, Jewellery and Eyewear.

Watches – Not Just Time, but Fashion:Department store growth rates are at robust levels – and as department store sales are impulse purchases in the watch segment, they indicate good sentiment on watches. Fastrack is doing well and there is a scope to leverage the brand even more into the accessories space. Titan holds c70% of the organised market share.

The company sees a big opportunity to target the INR5,000-20,000 band. Titan has brands such as Xylys and Nebula and a multi-brand watch format Helios (where it has international brands such as Tommy Hilfiger) to play in this segment. They expect to open around 15 Helios stores this year (plan to have 50 stores in next three years). About 35% of the shelf space will be for Titan and the rest, for other premium brands.

Titan’s strategy for the watches division overall is not to launch new brands, but rather new collections / designs at a premium price.

Jewellery Business – Cashing on Next Generation: Gold prices have recently spiked and generally it is observed that demand is affected in the short run in these cases. While industry has not seen such buoyant demand, it seems that Titan is therefore taking share from the large unorganised market.

During times of high gold prices, customers generally turn in their existing gold for recycling and with a marginal investment they get new jewellery – for Titan this means they get to earn the making charges on the recycled jewellery. During spikes in gold prices, about 30% of sales is composed of recycled jewelery.

Titan believe that in jewellery it has the advantage of being de-risked to the extent that it is a national player – and therefore slack in one region is made up by festive season demand in another.

Titan sees competition from organized players such as Rajesh Exports’ Shubh / Laabh Chain, but also from the large traditional jewellers who are now expanding from being a single city/state chain into a regional chain. The key challenge that these home-grown chains will face is to what extent they can inculcate a corporate culture and therefore how scalable can they make their business. However, they do not think that this is likely to impact their 5 year sales targets as there is a huge share still held by small jewellers which Titan can take.

Eyewear Segment – Looking Beyond the Rest: Prescription eyewear is a relatively new segment for Titan, (entry about 2 years back) and it has had a fast ramp up to 85 stores currently. Company plans to add 50 stores this year ramping up to a c200 store chain in the next 2-3 years.

The TitanEye+ Stores takes longer than watch or jewellery store to break even (24-30 months for eyewear vs 18 months for other stores). The lenses business is about 15-18b per annum in India in value terms and about 25-30 million in volume terms. The potential for growth in this business is high as an estimated 350 odd Million
people will require eye correction in future.

Titan’s expansion strategy for Mumbai in particular and Delhi to some extent is to have a large number of small stores (as rentals are high) to achieve good geographical spread as people in metros lack time to travel long distance for eyewear. Ideally they would like to have presence in and around about 25 railway stations. Their choice of location is more where people live rather than where people work.

In the next Article we will discuss about some Myths and Realities of Titan’s Business. So Far Titan on Fast and Right Track ? Share your thoughts.