In the apparel value chain, fibre suppliers (whose cutting-edge technology may help breed innovation) and brand owners are the most profitable operators. Other textile players in between may have divergent profitability depending on their capabilities, capacity and customer strategies, etc. In this report, our focus is on those names dealing with cotton or synthetic fibres.

Yarn makers’ profits are relatively volatile, depending on the price fluctuations of raw materials. However, the huge initial capex may deter new entrants and hence offer the existing players some margin protection. Weiqiao and Texhong are among market leaders in this segment and have dominant market shares in some certain products, like Texhong’s 30% market share in stretchable core-spun yarns globally.


Fabric makers and garment makers are generally most labor intensive throughout the whole apparel value chain, but fabrics making requires better skills, and thus usually higher margins. Their margins are also partly determined by the materials they deal with. Synthetic materials and functional items generally offer better margins as they are mostly used in higher-value products (the margins of lingerie products are usually above those of casual products) which require more advanced equipment, technology inputs and skilled workers.

The following figure shows The value chain of textile industry 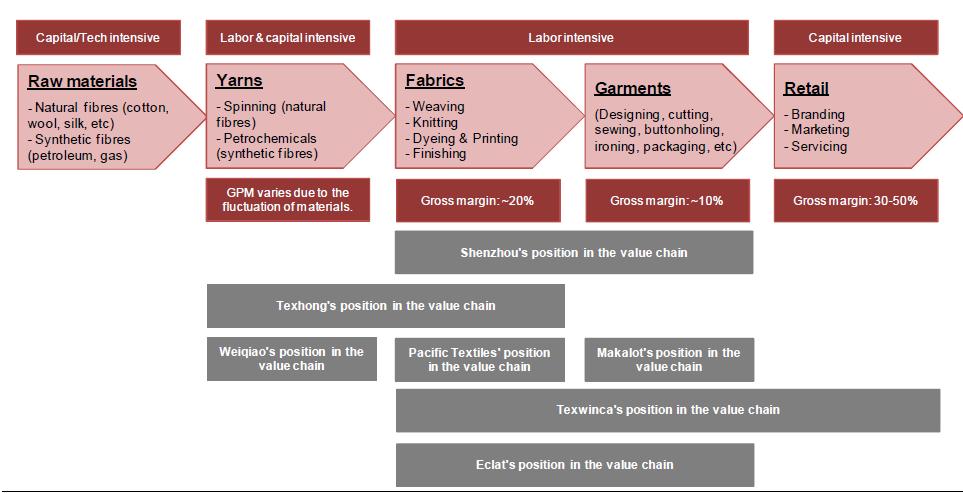 The concern of labor costs in China has driven more and more textile players to relocate to other countries. The destinations include Vietnam, Cambodia, Indonesia, South Asia or even East Europe or Latin America, depending on manufacturers’ strategic plans. Among all of these locations, Vietnam is the most preferred, from the perspective of both OEMs/ODMs as well as brand owners.

The advantages to manufacturing in Vietnam are three-fold. First, which is most direct and explicit, Vietnam’s wage levels are still far below China’s (around half on average). Land prices and utilities (mainly electricity and water) are also much cheaper. The second one is the location advantage. The governments of China and Vietnam have built up infrastructure in recent years to facilitate more cross-border trade, which makes northern Vietnam closer to China’s Guangdong then other inland provinces. However, Vietnam may be unable to take everything away from China. Some higher-end products (such as synthetic fabrics), which require more sophisticated labor forces or higher capex, will remain in China. Capacity in China should gradually improve to service higher-margin business with more R&D or technology inputs.