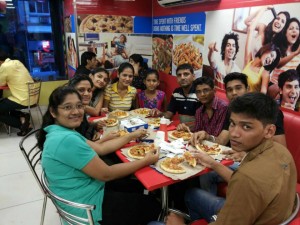 Jubilant FoodWorks is the largest food service company in India and is Master Franchisee for Domino’s Pizza in India, Nepal, Bangladesh, and Sri Lanka. With over a 50% share of the market, it is the leader in the formal pizza market. It is also the Master Franchisee for Dunkin’ Donuts in India. Currently, there are 806 Dominos stores (170 cities) and 38 Dunkin Donut stores (13 cities).

Same Store Sales growth has declined further to ‐5.3% while the addition of new stores has resulted in pressure on margins. We believe the pressure on Same Store Sales growth is likely to persist in H2FY15 and recede from Q1FY16 on account of base getting more favorable and improving consumer sentiment. While SSG is likely to have bottomed and pick is imminent but the stock price builds for a much sharper revival which seems remote. This weakness also reflected in peers such as Yum India (Pizza Hut, KFC: 4.0% decline), although the decline was sharper for Jubilant.

Management highlighted: a) they have not seen any significant uptrend emerging so far in 1HFY15. Pizza pricing (up ~18-20% in last 18-20months) also a concern as “value for money” score declining; b) Expect the SSSG return to positive / normal territory at least 2/8 quarters away; c) It is also tweaking its expansion plans, and will now have 60% of new stores outside top-10 cities to mitigate the decline in same store sales and consequently also improve profit margins. d) suggests margins’ return to normal will require SSSG moves to the double digit level.

Dunkin Donuts response in Mumbai / Bangalore is promising, plans for expansion in new cities on track and expect to open total 30 new stores in FY15. Management intends to use existing Dominos commissaries to support Dunkin Donuts stores for Mumbai and Bangalore. The format does not have a higher dependence on commissaries as donuts are the only products that are manufactured at the commissary. New commissaries at Guwahati, Hyderabad and Nagpur will commence operations in 2HFY15 while the new Noida commissary will commence in FY16 (land purchase underway currently)